The cloud mining pool was created by Bitmain in order to diversify its business, along with other similar companies. Through the efforts of the management, Antpool took first place in terms of the hashrate of Bitcoin. bypassing competitors BTC.com and F2pool.

Among other cryptocurrencies supported by the service, most of the computing power comes from mining Dash, where Antpool owns a 24% stake. The total number of coins mined by the pool reaches 13 assets:
• Basic: Bitcoin, Bitcoin Cash, Ethereum, Zcash, Dash, Litecoin, Monero, Ethereum Classic
• Innovative: DCR, RVN, DGB and CKB
The cloud mining platform operates on three types of rewards, one of which, Solo-mining, was invented by the company independently. Antpool allows a miner to search for a block on his own ASIC miner and / or with the help of rented facilities, leaving him all the mined reward.
The main goal of creating a cloud pool is to decentralize Bitcoin mining, which is reflected in the policy of fees. Antpool offers zero fees on BTC routes and smart mining of its forks (BCH, BSV). The rest of the commissions are in the competitive range from 1% to 4%, depending on the type of remuneration and the type of coin.
Pool official website https://v3.antpool.com/

The largest mining equipment manufacturer Bitmain opened the Antpool pool in 2014. This direction was overseen directly by Jihan Wu, the founder of the world’s first mass production of ASIC miners.
Antpool has been heavily involved in supporting the Bitcoin Cash split.The Bitmain founder planned to gain control over this cryptocurrency and raise its value to the level of Bitcoin. As a result, the pool tried to manipulate the BCH rate by sending 12% of the coin’s issue to burn addresses.
In the spring of 2021, Bitmain decided to withdraw the pool from the holding and sold this business without disclosing the acquirers.

Features of working with the Antpool pool

Account registration is available to the user on the main page of the site using the option located in the upper right corner. Antpool partially Russified the interface, greatly simplifying the procedure for opening a Personal Account.

The user needs to enter an email address, go through the captcha, agree with the terms of use of the resource, receive and activate the account verification link from the service letter.
In the second step, the user must enter a phone number and receive an SMS with a code to complete the registration process.

The cloud pool invites users to open subaccounts to organize the connection between miners and pools. The client has the ability to configure up to a thousand of such connections, united into groups under one account in the Personal Cabinet.

An additional account is configured for each ASIC miner or farm with video cards by clicking the “Setting” option through the “Add sub-account” menu button.

A new subaccount is opened immediately after entering the nickname invented by the user in the service window. It is linked to the email address of the Personal Account.
Antpool allows opening up to 300 such subaccounts to the same address. The nickname of each of them acts as an ASIC miner or farm worker.

The user can choose for mining any or several cryptocurrencies from the 13 coins mined by the pool, subject to the availability of technical capabilities. They are determined by the ASIC miner model that supports a specific hashing algorithm.
Farms on video cards open up a much wider choice of digital currencies for mining, but in the end, the profitability of this process decides everything.
On the main page of Antpool, there is a table of equipment with a set of characteristics and a calculator that allows you to determine the most profitable mining algorithms and types of coins.

Below is an example of ASIC miner and farm settings for the most popular digital assets.

Before starting mining, register a wallet to which a reward will be withdrawn daily, provided the volume of the mined cryptocurrency exceeds the minimum threshold. Antpool lists this figure in the table of supported digital currencies on the main page of the site.

The wallet is linked in the line of the selected additional account through the “Configure” option. In the new window that opens, the address is entered by clicking the “Edit” option. In the same place, the user can change the BTC payment threshold from the default value of “0.01” to “0.001” and decide on the option of earning by choosing from three options: PPS +, PPLNS, or SOLO. 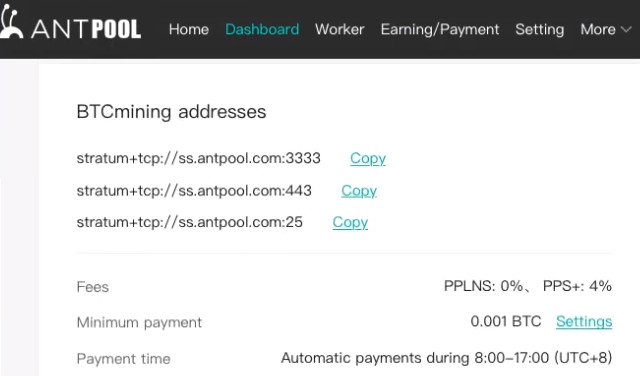 The cloud pool opened for the owners of ASICs working with the SHA-256 algorithm the option of mining Bitcoin with automatic switching of the miner to mining forks of Bitcoin Cash and Bitcoin SV. The smart system independently monitors the level of profitability of the reward for each cryptocurrency.

As a result, the client receives additional income, which is paid two hours earlier than the total estimated time. The settings for almost smart mining do not differ from the steps described above.

Smart mining Antpool is available for the following settings:

The work of the Litecoin and Dogecoin blockchains on the same skrypt algorithm led the developers of both cryptocurrencies to the idea of ​​organizing combined block mining for better protection against 51% attacks. This move allowed manners to receive two rewards in parallel, solving one PoW problem for the LTC and DOGE block.

Mining any of these cryptocurrencies in Antpool brings such additional income. Litecoin mining setup is standard except for adding an address. The client selects the LTC ticker from the list of cryptocurrencies in the Personal Account and goes to the subaccounts through the “Setting” settings.

The LTC wallet address is entered in the “Configure” section in the same way as described in the above examples. Additionally, the user must enter the DOGE address by clicking the “More” button in the line with the LTC address.This will display a link to the functionality of adding a Dogecoin wallet, which will need to be registered in the pop-up window.

The Antpool platform has allocated low-cap cryptocurrencies to the “innovative mining” zone. Setting up and mining coins takes place on a separate website – https://lab.antpool.com/. The list of available assets and server stratums is published on the main page: 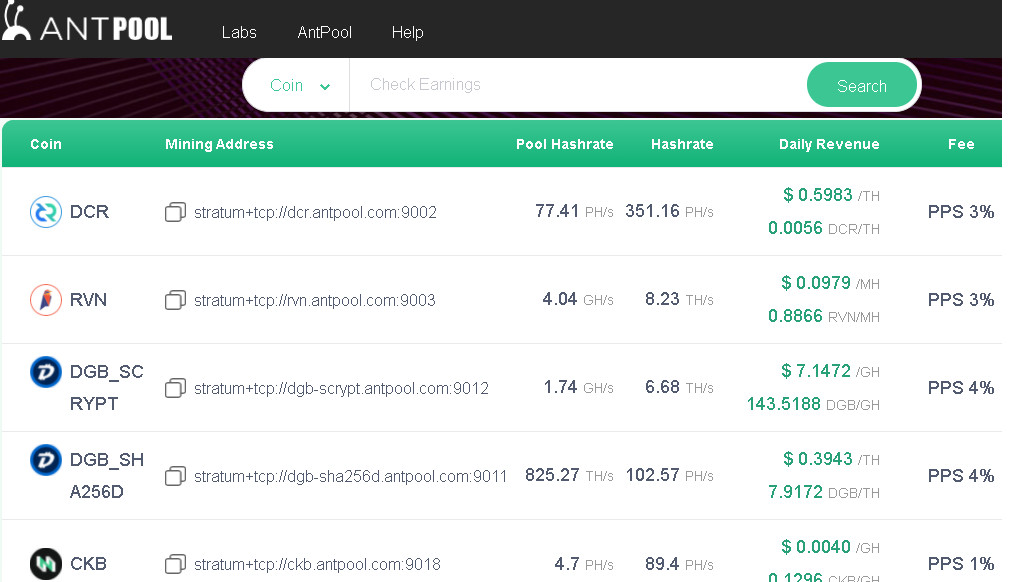 The innovative mining at Antpool Lab is anonymous. After installing the software available for download on the “Tools” website page, the user must register the wallet address as a worker. It is also used on the site to get statistics on mining and payments.

The Antpool cloud service allows customers to open access to an array of reports on the ASIC miner’s operation to any outside observers. With the help of filters, the user independently selects the types of information: type of equipment, hash rate, payment of received rewards and transaction history.
The service allows miners to search for investors, trust funds or provide remote reports by the owners of data centers that provide inclusive services for servicing ASIC miners.
The Observer account setting is available only to authorized users who have registered their Personal Account on Antpool.
Access setting is carried out on each subaccount, the list of which opens after clicking the “Setting” option. In the line selected for the additional account, click on the “Authorize” item.

The settings window will open, where you need to:
1. Type in the e-mail address of the Observer, which must be previously associated with AntpoolSomehow to mark for yourself with a comment of the user who has access
2. Mark the provided information with filters
3. Save and apply settings
4. The list of accounts with access rights is at the bottom of the window

Potential clients of Antpool and partners of the pool should pay attention to reaching the first place in Bitcoin hashrate in the year that mining was banned by the Chinese authorities and get out of Bitmain’s patronage. This testifies to the unique ability of the company to grow its business in extreme conditions.
The size of the cloud pool allows Antpool to work on expanding its client base, offering zero commissions in a number of mining areas and several reward options. The three-level system of accounts allows customers not only to receive reports, but also to build their own business in the Personal Account.